Report on the conference “How to commemorate the Great synagogue of Vilna site?” by Dr. Samuel D. Gruber 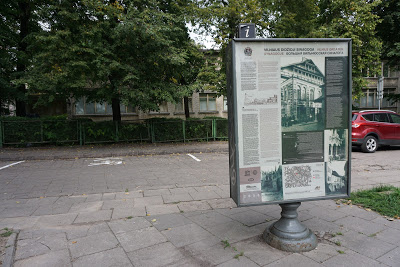 In September I had the pleasure of participating in the conference called to discuss the future of the site of the former Great Synagogue of Vilna/Vilnius. Specific projects and general ideas for the site have been floated for almost thirty years, but the area remains mostly neglected. It is comprised of a scruffy urban park amidst Communist-era apartment blocks. A  low-rise Soviet-era kindergarten is set smack over a good part of the synagogues buried foundations.

In recent years several short archaeological seasons, led first by Zenonas Baubonis and Mindaugas Maciulis and subsequently by Jon Seligman, have revealed well-preserved sections of the sanctuary, and most recently, two mikva’ot, part of a bath complex on the shulhoyf, next to the synagogue.

It was clearly the consensus of the conference that this situation could not and should not be sustained. City officials now appear to be sufficiently embarrassed by the site, which is visited by thousands of international visitors every year. Even the mayor of Vilnius agreed on this point, and he thought a five-year time period was favorable, given that Vilnius will be celebrating its 700th anniversary in 2023.  Since the conference I’m told there have been continuing talks about how to move forward.

Almost everyone favored continuation of the archaeology, but there is no consensus yet as to what end. The site can be treated in many ways – from an archaeological park, or a memorial garden, or as an interpretive center or museum, or even with a completely rebuilt, and mostly modern, structure. While various options were put forward, it was not the thrust of the conference to be absolute, but rather to search widely for inspiration and examples about how the site could be best preserved and presented, and how accessibly, forcefully, and explicitly the site and its history could be publicly presented.

Fine papers by Vladimir Levin and Sergey Kravtsov of the Center for Jewish Art presented the history of the synagogue and the development and meaning of its architecture. Another by Aistė Niunkaitė-Raciuniene presented detailed and excellent account of representations of the synagogue in art, and especially through the holdings of Vilnius’s Museum of Tolerance, where she is curator.

I, too, spoke on a related subject, providing many examples from abroad – including the United States – of how archaeological remains have been conserved, protected, presented, interpreted, and deconstructed as historical, cultural,or  memorial objects or as sites of veneration or commemoration. I’ve written on this blog in the past and will in the future about  examples of preservation of ruins, but I’ll hold off here, since my paper will be available in a published form.  Important, too, were several more detailed comparative presentations about measures taken in other cities, including Berlin and Cologne.

Israeli architect Tsila Zak presented her latest concept for the area. She first won a competition in 1980 that would address the site and she has been adjusting, refining, and adapting this for decades. Over the years, it has been endorsed and accepted by many local governments and leading cultural figures, but never implemented. Whether Zak’s design will now have a chance in uncertain. Her project addresses many of the main concerns and seems very practical. She re-instates the older street pattern and approximates the former elevation, and she creates a public memorial space – part paved and part green – that includes important symbolic elements of the synagogue but also is designed to accommodate individual and group gatherings, continuing a fundamental role of a synagogue space. Zak’s design could be built in phases and adjusted in many ways. She has given years of thought to the problem of the place and space, so her work seems the best place to start a broad public and professional discussion.