The Great synagogue, Batei Midrash and Kloyzn in Vilnius 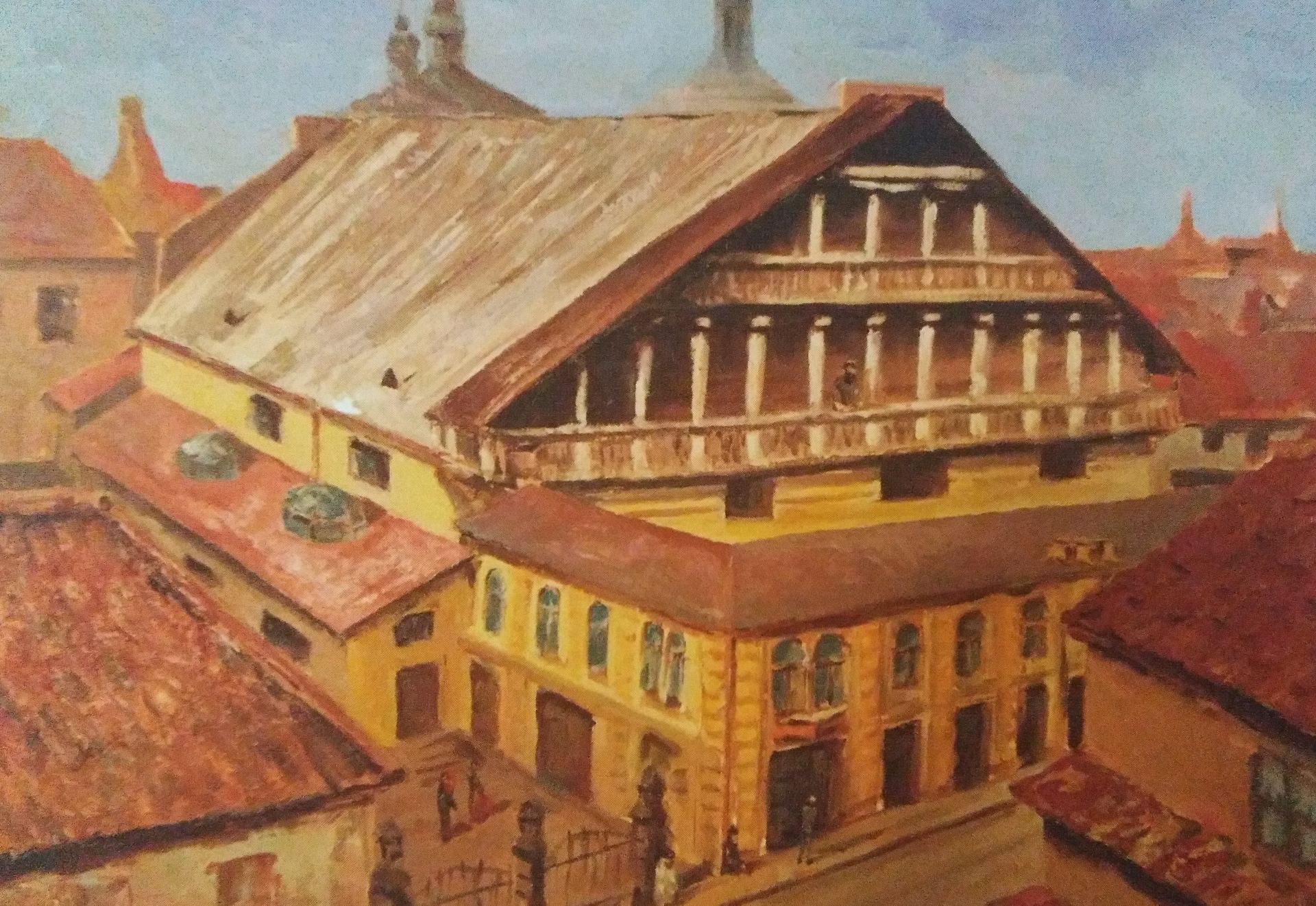 The first kloyz in Vilnius – the Old Kloyz in the shulhoyf – most probably appeared soon after the construction of the Great Synagogue in 1633. During the 18th century new kloyzn were established by various religious and professional associations, as well as by private individuals. In 1729 the Vilnius kahal transferred the right of giving permissions for the establishmentof private minyanim to the Tsdakah Gdolah (Great Charity) Association, the main communal organization responsible for social welfare. This right was still in force in 1821, even though in 1754 the rabbinical court of the community prohibited the foundation of private houses of prayer. Initially, the kloyzn were established in different courtyards in the vicinity of the shulhoyf, and from the early 19th century they spread throughout the city. In the late 18th and the first half of the 19th century, the prominent members of Vilnius Jewish elite used to establish private kloyzn in their houses, thus emphasizing their social status, wealth and devotion to the Torah study. Private kloyzn continued to appear in new quarters of the city in the first half of the 20th century, while many formerly private kloyzn in the city center were passed on to various professional associations in the second half of the 19th century. Many Jewish institutions had prayer halls in their premises: the hospital, the almshouse, the cheap canteen, the Talmud Torah school, the Rabbinic Seminary and others. With the settlement of Jews in the suburbs of Vilnius, the synagogues and kloyzn were built there too. Vilnius kloyzn served not only as places of prayer for certain groups of Jews. Yeshivas or groups of Talmudic scholars, supported by the worshippers, were housed in many kloyzn. Many kloyzn hired a Talmudic scholar (maggid shi’ur) in order to provide lessons in sacred texts for the worshippers. Available data show that 40 synagogues and kloyzn hired a permanent maggid shi’ur even during WW I. Many kloyzn served also as headquarters of the gmilut ḥasadim associations, organized by the worshipers, which
provided loans without interest for their members and for the needy. Local Jews were proud of the large number of synagogues and kloyzn in Vilnius and the important rabbis and Talmudic scholars associated with them. The majority of Vilnius kloyzn, especially those in the old town, were situated in regular dwelling houses. Sometimes they occupied one or two floors in a courtyard wing and their function was not articulated on exterior. In other cases, a kloyz was built as a special wing in a courtyard. Only a few prayer houses, especially in suburbs, were facing streets and had elaborate street façades. Six synagogues, 33 prayer houses (kloyzn) and 127 minyanim existed in Vilnius in 1833–34, eight of them situated in the shulhoyf. In 1847 the Crown Rabbi of Vilnius, Israel Gordon (1877–55) reported of 5 synagogues and prayer houses, all but two of
which existed before 1835 (a questionable statement, since the law from 1835 demanded permission from the authorities for establishment of a synagogue).In 1869 the authorities counted six synagogues and 54 prayer houses. Rabbi Dr. Isaak Rülf (1831–1902) from Memel (Klaipėda) was told in 1881 that there are more than 80 prayer houses in the city, among them more than 20 kloyzn of craftsmen. In 1887 there were 93 prayer houses, including those in the suburbs; 9 houses of prayer sent their representatives to the election of the city’s Crown Rabbi in 1904–5 and 104 prayer houses were officially registered in 1910. In 1916 the community took care of 99 kloyzn and the Great Synagogue, but was not responsible for the kloyzn in the Jewish institutions, such
as the hospital and almshouse. Lastly, 105 prayer houses were officially registered in 1925 and 1936. However, these numbers were not exact: for example, the librarian of the Strashun Library (and former unter-shames in the Old Kloyz) Khaykl Lunski (ca. 1881–1942/43) listed 80 kloyzn in his book written in 1917 and published in 1920. 110 synagogues, batei midrash and kloyzn were described in the report, probably prepared by Avraham
Nisan Yaffe (the secretary of Rabbi Ḥaim Ozer Grodzenski [1863–1940] and a shoḥet) in the late 1941 and early 1942, on demand of the Judenrat for the Vilnius Headquarters of the Operational Staff Rosenberg (Einsatzstab Rosenberg) – a Nazi institution invested with collecting Jewish cultural treasures. In 1974 the editor of the album Jerusalem of Lithuania Leyzer Ran collected names of 160 synagogues and prayer houses in Vilnius
before WW II; however, he registered the same kloyzn several times under different names. Yeḥezkel Kremerman (b. 1921) republished Ran’s list adding his explanations and some addresses. The description below is inspired by Yaffe’s report to the Rosenberg Headquarters and is based on the list by Leyzer Ran, which does not include addresses of the prayer houses. With the help of the lists prepared for the rabbinic elections of 1904, reports of the kloyzn to the central community in 1915–20, the Yiddish guidebook 1000 yor vilne published by Zalman Shik in 1939, Yaffe’s description and other sources it was possible to identify the majority of the kloyzn from Ran’s list and to add several kloyzn not included in it. The description is organized topographically: first the shulhoyf with its twelve synagogues, then the old Jewish quarter, the old town, the new town, the suburbs and the kloyzn the location of which could not be identified. The house numbers are given according to the pre-WW II numeration, as they appear in the 1904 and 1915–20 lists, Yaffe’s and Shik’s works; in relevant cases the contemporary numeration is provided in parenthesis. This description also quotes from the belles-lettres, especially those of Chaim Grade (1910–82), a famous Yiddish poet and writer who spent his youth in Vilnius and devoted most of his works after WW II to the annihilated world of the Vilnius Jews. As compared to other sources, Grade describes the city with great precision; therefore his works are regarded as full-fledged memoirs. Nonetheless, it should be taken into account that the writings by Grade and other authors are fiction and not regular memoir books.

The Vilnius shulhoyf developed around the Great Synagogue in the 18th century and occupied
a quarter between today’s Žydų (Jewish) and Vokiečių (German) Street. The shulhoyf consisted of two courtyards. The first one – the shulhoyf itself – was situated between the southwestern façade of the Great Synagogue and the Gaon’s Kloyz, and entered through a gate at 6 Žydų Street. In the 1930s this courtyard was paved with concrete. The second courtyard – called durchhoyf, a passage court – included the courtyards of the houses nos. 6, 8, 10, 12 on Vokiečių Street; it was cobbled with stones. Both courtyards were connected through the arched passages under the Old Kloyz or through an open passage around the New Kloyz. The shulhoyf was the true center of Jewish life in Vilnius. Besides the twelve synagogues and kloyzn, described below, the shulhoyf comprised the community’s “well” – a water basin from 1759 connected with a pipeline to the Vingrių springs that belonged to the Dominican friars. The communal bathhouse and public lavatories were placed nearby; from 1772 their sewage was connected to that of the Jesuit monastery.26 The new building of the bathhouse was constructed in 1823–28. The shulhoyf was situated on the territory designed by the Nazis as the “small” ghetto, or “Ghetto II.” It was intended for Jews uncapable to work and existed only from September 6 until October 21, 1941. Since October 1941 the shulhoyf stood abandoned; part of the valuable religious objects and books were rescued and brought to the Jewish library in the “large” ghetto. Judging upon the photographs made during the war, the shulhoyf was not heavily damaged; additional destructions happened during the liberation of the city in 1944. In the late 1940s the Soviet authorities began to demolish the buildings in the shulhoyf and by 1957 it was completely razed down. Vokiečių Street was enlarged, thus occupying the western part of the former shulhoyf; new apartment houses were built along the street in the 1950s and 60s.28 The Vilnius shulhoyf was frequently depicted by artists, both before and after the Holocaust; dozens if not hundreds of photographs of it were made before the Holocaust and immediately after it, prior to its complete demolition. The shulhoyf occupies also a significant place in Jewish belles-lettres, especially those written by the Vilnius-born Yiddish authors. Chaim Grade gives a detailed description of the shulhoyf in his famous novel The Agunah (The deserted wife); in 1958 he published a collection titled Der Shulhoyf;
it stands in the center of his story “Zeydes un eyniklekh” (Grandparents and grandchildren). Another Yiddish writer, Avrom Karpinovich (1914–2004) describes the shulhoyf in his stories “Di kats” (The cat) and “Der shulhoyf” in his collection Af vilner vegn (On Vilnius’ paths).