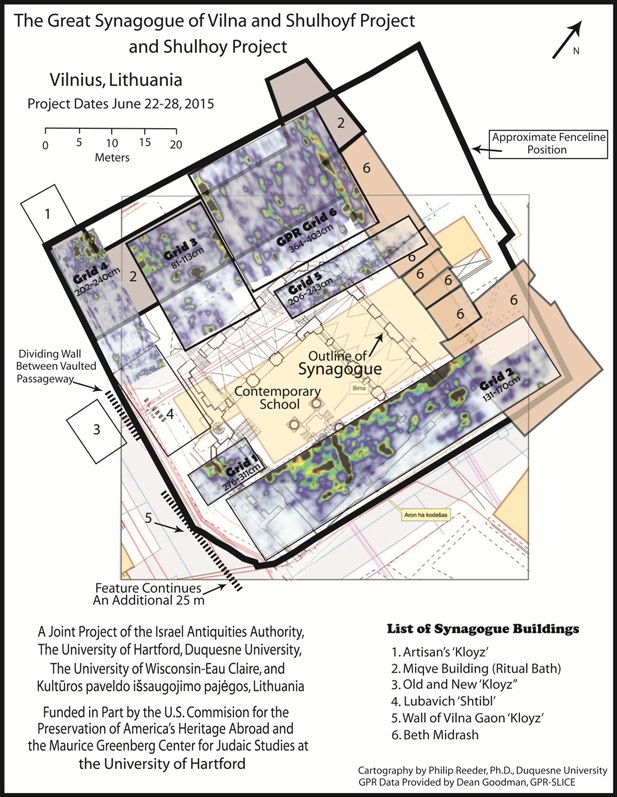 The Great Synagogue of Vilnius (Vilna) is an excellent target because the GPR system works well when a well-defined area can be worked on and plotted on an existing footprint guided by the research questions stated at the outset and the physical constraints dictated by the site.

It is proposed to cover three separate areas of the site. In 2015 the GPR survey was concentrated to the immediate area of the destroyed synagogue (area A in figure below), the aim being to identify the building of the synagogue and of the shulhoyf. Particular attention was given to isolating the remains of the ritual bath (miqve) and the water system, as there is a strong possibility that these areas of the sites are better preserved as they were set below the original floor levels. The other areas to be surveyed with GPR in coming seasons are area B to the north of the synagogue complex and area C to the south, the aim being to outline the structures of the immediate area of the synagogue to connect the complex with the surrounding urban fabric.
GPR Survey Areas of the Great Synagogue and Shulhoyf of Vilna (Vilnius)

As we noted the goal of the first season of the GPR survey at the site of the Great Synagogue and Shulhoyf of Vilna was devoted to gauging the exact location of underground remains and to better understand the archaeological potential of the site prior to the future investment of further resources to fully uncover the remains through excavation. With the limited available time of only five days it was decided to concentrate on the area A in the plan, an area covering a major portion the synagogue and shulhoyf.

The first area surveyed was the space west of the school building, up to the line of trees along Žydu Street. To provide a control two grids we set up to by connecting up to the known results of the 2011 excavation at the site conducted by Zenonas Baubonis. While a full report of the GPR survey is still forthcoming, initial results indicated clear matching between those of both the 2011 excavation and the plan of the synagogue with the GPR survey results. Especially clear in the scans were the interior and exterior wall, the Bimah and the Aron Kodesh (Torah Ark).

The second area surveyed in 2015 was east of the school building, covering areas that according the plan of the Shulhoyf, should included the Miqvecomplex, the Old Kloyz, the Yesod Kloyz and the back section of the Great Synagogue.